Distributed denial-of-service (DDoS) attack is an attempt to make a machine or network resource unavailable to its intended users.

Although the means to carry out, the motives for, and targets of a DoS attack vary, it generally consists of efforts to temporarily or indefinitely interrupt or suspend services of a host connected to the Internet.

In a denial-of-service (DoS) attack, an attacker attempts to prevent legitimate users from accessing information or services. By targeting your computer and its network connection, or the computers and network of the sites you are trying to use, an attacker may be able to prevent you from accessing email, websites, online accounts (banking, etc.), or other services that rely on the affected computer.

DDoS, short for distributed denial-of-service, is a type of cyber-attack that overwhelms and eventually shuts down access to a network, effectively keeping others from reaching it. The most common way to do this is the attacker gathering “zombie” computers that they can direct in botnets to flood the target network. Sometimes this is done through pure brute force, sometimes by targeting a weaker layer of a website and exploiting features. Sometimes it is both of those things to make it harder to stop. The end result is usually the same: the business is offline, and there’s no way to know for sure when the DDoS attack will end. Between the frantic IT staff trying to block the wave of bad traffic, the apologies and frustrations of affected companies, and the online complaints of clients, the affect of an attack can be substantial and often a devastating loss for a company, adding up to hundreds of thousands of dollars in profit loss and collateral damage from the attack.

The reasons that a DDoS attack can occur are as multiple as the people it affects. There really is no particular type of business that isn’t a target for a DDoS attack. They can happen to government services just as easily as to a video game voice chat. The DDoS attacker might be doing it for fun or as a statement against their target. They could do it for a ransom against the company they’re keeping from doing business, or be a competitor trying to take the credibility out of their opposition. They could also be doing it as a distraction to cover up another type of cyberattack.

What we do know is ways to stop the damaging flood and to be prepared for the next time. Staminus is here to help you.

The most common and obvious type of DoS attack occurs when an attacker “floods” a network with information. When you type a URL for a particular website into your browser, you are sending a request to that site’s computer server to view the page. The server can only process a certain number of requests at once, so if an attacker overloads the server with requests, it can’t process your request. This is a “denial of service” because you can’t access that site.

An attacker can use spam email messages to launch a similar attack on your email account. Whether you have an email account supplied by your employer or one available through a free service such as Yahoo or Hotmail, you are assigned a specific quota, which limits the amount of data you can have in your account at any given time. By sending many, or large, email messages to the account, an attacker can consume your quota, preventing you from receiving legitimate messages.

On the Internet, a distributed denial-of-service (DDoS) attack is one in which a multitude of compromised systems attack a single target, thereby causing denial of service for users of the targeted system.

Denial-of-service threats are also common in business,and are sometimes responsible for website attacks.

This technique has now seen extensive use in certain games, used by server owners, or disgruntled competitors on games, such as popular Minecraft servers.

Increasingly, DoS attacks have also been used as a form of resistance. Richard Stallman has stated that DoS is a form of ‘Internet Street Protests’.The term is generally used relating to computer networks, but is not limited to this field; for example, it is also used in reference to CPU resource management.

One common method of attack involves saturating the target machine with external communications requests, so much so that it cannot respond to legitimate traffic, or responds so slowly as to be rendered essentially unavailable. Such attacks usually lead to a server overload. In general terms, DoS attacks are implemented by either forcing the targeted computer(s) to reset, or consuming its resources so that it can no longer provide its intended service or obstructing the communication media between the intended users and the victim so that they can no longer communicate adequately.

Denial-of-service attacks are considered violations of the Internet Architecture Board’s Internet proper use policy, and also violate the acceptable use policies of virtually all Internet service providers. They also commonly constitute violations of the laws of individual nations.[citation needed]

Some specific and particularly popular and dangerous types of DDoS attacks include:

This DDoS attack leverages the User Datagram Protocol (UDP), a sessionless networking protocol. This type of attack floods random ports on a remote host with numerous UDP packets, causing the host to repeatedly check for the application listening at that port, and (when no application is found) reply with an ICMP Destination Unreachable packet. This process saps host resources, and can ultimately lead to inaccessibility.
ICMP (Ping) Flood

Similar in principle to the UDP flood attack, an ICMP flood overwhelms the target resource with ICMP Echo Request (ping) packets, generally sending packets as fast as possible without waiting for replies. This type of attack can consume both outgoing and incoming bandwidth, since the victim’s servers will often attempt to respond with ICMP Echo Reply packets, resulting a significant overall system slowdown.
SYN Flood

A SYN flood DDoS attack exploits a known weakness in the TCP connection sequence (the “three-way handshake”), wherein a SYN request to initiate a TCP connection with a host must be answered by a SYN-ACK response from that host, and then confirmed by an ACK response from the requester. In a SYN flood scenario, the requester sends multiple SYN requests, but either does not respond to the host’s SYN-ACK response, or sends the SYN requests from a spoofed IP address. Either way, the host system continues to wait for acknowledgement for each of the requests, binding resources until no new connections can be made, and ultimately resulting in denial of service.
Ping of Death

A ping of death (“POD”) attack involves the attacker sending multiple malformed or malicious pings to a computer. The maximum packet length of an IP packet (including header) is 65,535 bytes. However, the Data Link Layer usually poses limits to the maximum frame size – for example 1500 bytes over an Ethernet network. In this case, a large IP packet is split across multiple IP packets (known as fragments), and the recipient host reassembles the IP fragments into the complete packet. In a Ping of Death scenario, following malicious manipulation of fragment content, the recipient ends up with an IP packet which is larger than 65,535 bytes when reassembled. This can overflow memory buffers allocated for the packet, causing denial of service for legitimate packets.
Slowloris

Slowloris is a highly-targeted attack, enabling one web server to take down another server, without affecting other services or ports on the target network. Slowloris does this by holding as many connections to the target web server open for as long as possible. It accomplishes this by creating connections to the target server, but sending only a partial request. Slowloris constantly sends more HTTP headers, but never completes a request. The targeted server keeps each of these false connections open. This eventually overflows the maximum concurrent connection pool, and leads to denial of additional connections from legitimate clients.
Zero-day DDoS

“Zero-day” are simply unknown or new attacks, exploiting vulnerabilities for which no patch has yet been released. The term is well-known amongst the members of the hacker community, where the practice of trading Zero-day vulnerabilities has become a popular activity. 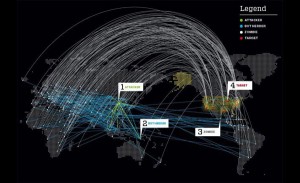 DDOS is a type of DOS attack where multiple compromised systems — which are usually infected with a Trojan — are used to target a single system causing a Denial of Service (DoS) attack. Victims of a DDoS attack consist of both the end targeted system and all systems maliciously used and controlled by the hacker in the distributed attack.

According to this report on eSecurityPlanet, in a DDoS attack, the incoming traffic flooding the victim originates from many different sources – potentially hundreds of thousands or more. This effectively makes it impossible to stop the attack simply by blocking a single IP address; plus, it is very difficult to distinguish legitimate user traffic from attack traffic when spread across so many points of origin.